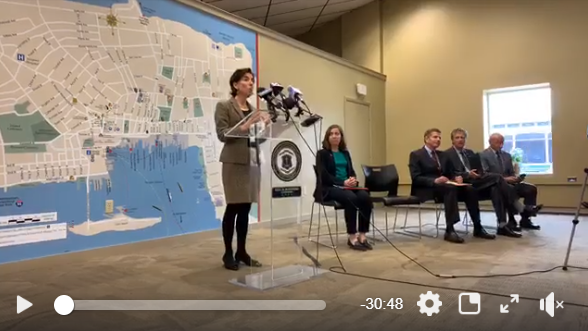 At a press conference at the Newport Gateway Center earlier today, Governor Gina Raimondo, Lieutenant Governor Daniel McKee and Senator Louis DiPalma called for the passage of legislation that would give the state the tools necessary to demand greater accountability from National Grid.

Legislation pending before the House and Senate requires National Grid to file comprehensive emergency preparedness plans each year and brings Rhode Island law in line with the laws of neighboring states. The bill also enables the State to levy fines if a utility fails to comply with standards and establishes that such fines be paid by the utility’s shareholders and not passed on to ratepayers.

Raimondo, McKee and other officials gathered in Newport to express support for the legislation following the multi-day natural gas service interruption on Aquidneck Island in January that left thousands without heat. An investigation into that incident is being conducted by the Division of Public Utilities and Carriers. The Division will issue a report on its findings once the investigation is complete, a target date of September has been set.

The Utility Service Restoration Act is sponsored in the House by Representative Brian Patrick Kennedy and in the Senate by Senator Roger Picard.