Two decades after buying the Race from Whitbread, Volvo has now transferred ownership to a new group, led by Richard Brisius and Johan Salén.

The ownership change was announced before the finish of the race last year, and the full transaction has now been completed.

Going forward, The Volvo Ocean Race will now be known as The Ocean Race with Volvo staying in the race family as a significant commercial partner as the races looks ahead to the next edition in 2021.

According to The Ocean Race, plans for the next race are well underway and an exciting collaboration with the IMOCA Open 60 class means two types of boat will compete in the next race – the high-tech, foiling IMOCA 60s, and the one-design VO65s that produced such intensely close racing last time out.

The Race reports they have teams already showing enthusiasm with strong interest and demand in both classes. The Notice of Race was published in December and the official entry period is now open.

Two of the top French sailors have set their sights on the next edition of The Ocean Race.

Paul Meilhat, the winner of the most recent edition of the Route du Rhum and Franck Cammas, the winning skipper of the 2011-12 Volvo Ocean Race, have each told French media they are working on campaigns for the 2021 edition of The Ocean Race.

Similarly, Franck Cammas spoke to the noted French sailing website Tip & Shaft in an interview published on Friday, saying that through his association with Oman Sail, he is working to put together a campaign.

The Race confirms on their website that the 2021-22 edition will begin from Alicante, Spain in the autumn of 2021 and will finish in Europe in early summer 2022. The host city procurement process for our stopovers is already well underway and the full route will be announced this summer.

Newport has previously hosted the race twice. Whether Sail Newport, the City of Newport, State of Rhode Island, and its partners plan on applying for a stopover in 2021-2022, has not been announced yet. 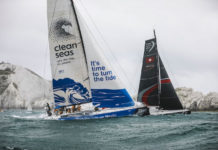