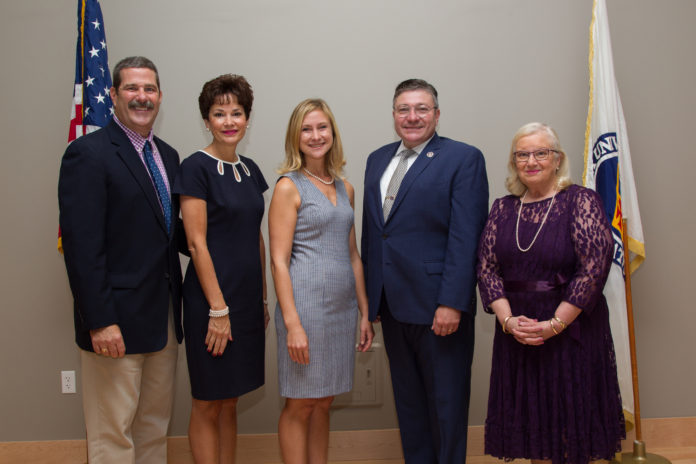 Newport, RI – Three Salve Regina alumni, along with the parents of a recent graduate, were honored by the university’s office of Alumni and Parent Programs during its Scholars & Scholarships Awards ceremony held during Fall Festival weekend. The following awards were presented:

Brian and Carla Lynch of Cumberland, the parents of 2018 Salve Regina graduate Jonathan Lynch, were presented with the university’s Exceptional Parent Volunteer Award during its recent Fall Festival Weekend celebration. The award recognizes a current Salve Regina parent for their outstanding volunteer or philanthropic efforts on behalf of the university and its students.

The Lynches have been involved in a variety of projects and initiatives during their son’s academic career at Salve that actively support other Salve students and their parents. Brian is a founding member of Friends of Salve Baseball and, together with Carla, they have been instrumental in fundraising efforts that support the team.

They have served on Salve’s Governor’s Ball and Dunes Club event committees, and have regularly volunteered their time by participating in Orientation parent panels in order to help parents with their students’ transitions to college.

Rebecca “Becca” Bertrand of Newport, a 2008 Salve graduate who serves as executive director of newportFILM, was presented with the university’s 2018 Outstanding Young Alumna Award during its recent Fall Festival Weekend celebration. The award recognizes exceptional achievement of alumni under age 35 who have demonstrated great promise and accomplishment in their chosen professions and through community, public or humanitarian service.

Brett J. Morash of New Rochelle, N.Y., a 2015 Ph.D. recipient from Salve Regina who serves as the executive director of the Shepherd Higher Education Consortium on Poverty (SHECP), was presented with the university’s Distinguished Graduate Alumnus Award during its recent Fall Festival Weekend celebration.

Morash oversees the national nonprofit that is dedicated to changing the way poverty studies are taught in higher education, coupled with experiential internships in poverty-focused agencies across the U.S. to educate students for a lifetime of professional and civic work diminishing poverty.

The eldest of seven children, Riker graduated from Salve Regina in 1968 with a degree in English and a minor in psychology. She completed post graduate certification as a teacher later that fall, and went on to earn a master’s degree in counseling from the University of Rhode Island, a master’s degree in administration from Providence College, and a nursing degree.