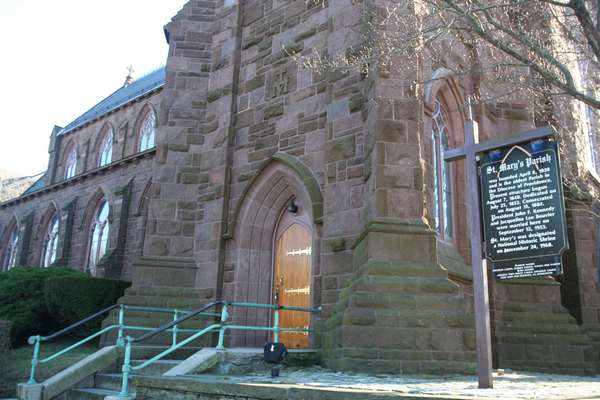 If you thought the City of Newport had a long history, you should spend some time reading up on each and every church, congregation, parish and religious meeting place. The triumphs and tribulations of each organization over hundreds of years is beautiful, remarkable and something that we should all spend more time learning about.

There are literally dozens of churches that call The City By The Sea home, here’s a look at some of the oldest and most historic churches in the area and some tidbits of their history that you might not know.

Keep on discovering, Newport is an amazing place….

1 – St John’s the Evangelist began meeting in the Third Street home of Peter and Harriet Quire in 1875.

2 – Peter Quire had worked with the Quakers in Philadelphia on the Underground Railroad prior to moving to the Point, a neighborhood first settled by the Quakers. By the end of 1875, the congregation had built its first church, now used as their Guild Hall.

3 – From its very beginning, many of the members were of modest means, though supported by the generosity of some of Newport’s more famous residents, including the Astors, the Browns, and the Chanlers. The church also had an early connection with the Naval War College, two of whose founders served on the vestry

4 – In the 1890s, the church was in financial straits, and it looked as if it might close, until Captain (later Admiral) Alfred Thayer Mahan brought the plight of the young church to the attention of his friend Sarah Titus Zabriskie, who in 1893 donated $100,000 toward the building of the Zabriskie Memorial Church in memory of her late mother, Sarah Jane Zabriskie. The cornerstone was laid in 1894 and the church was consecrated in November of that year.

5 -The beautiful stained glass windows of St. John’s Church illustrate many episodes of their religious history. Begin in the Blessed Sacrament Chapel in the south wing of the Church, and move to the right [clockwise] around the nave. Highlights of the New Testament tell the story of the life of Christ from His birth to betrayal, death, resurrection and Ascension. 2 – The congregation was active during the American Revolution and both churches’ meeting houses were used as barracks and hospitals by the British and French troops in Newport. Dr. Samuel Hopkins was the minister of the church in the late eighteenth century.

3 – The current building is a Romanesque Revival structure, designed by Joseph C. Wells of New York City and completed in 1857. It is a basically rectangular building, built out of Connecticut brownstone, with two ornately decorated towers.

4 – In the 1880s the congregation retained the artist John LaFarge to redecorate its interior. LaFarge had recently completed work on Trinity Church, Boston, and sought to provide a more elaborate interior than he was able to in Boston. He produced twenty stained glass windows and a series of murals, which represent the only fully integrated ecclesiastical interior he produced.

5 – The church was listed on the National Register of Historic Places in 1971 and was designated a National Historic Landmark in 2012, in recognition for the unique interior decorations executed in 1880-81 by John La Farge

1 – Many residents of the “fifth ward” (southern Newport) could not afford to attend church due to the tradition of churches selling pew seats. In 1841, three women from Trinity Church began to hold cottage meetings in their homes, inviting these neighbors to join them. By 1849, they had grown to 88 members and bought an empty Baptist Church on South Baptist Street. Various Episcopal clergy provided them with worship services.

2 – Natalie Bayard Brown replaced that building with the current stone building in memory of her husband , John Nicholas Brown, who died of Typhoid Fever in May of 1900. This building was designed by Ralph Adams Cram with the interior by Bertrand Grovesnor Goodhue.

3 – Edward King bought land on the corner of Spring and Dearborn Streets for $700 and donated it for a new church. The original church was a wooden Tudor building designed by Richard Upjohn and built by local carpenter, Michael Spencer. The total cost to build and furnish it was $15,000.19.

4 – At the entrance is our beautiful blue window, designed by Clement Heaton in 1925. The building of this window was documented by the Metropolitan Museum in New York. In 1996, photos of it were shown in Switzerland during an exhibit of Heaton’s works.

5 – The lectern is an angel with outspread wings to hold the bible. It was made by the Gorham Manufacturing Company and exhibited at the Columbian Worlds Fair in 1893, where it was purchased by Harold Brown and given to Emmanuel.

1 – This is the oldest Presbyterian Church in  Rhode Island, built of stone, with magnificent stained glass windows.

2 – In 1884, a group of earnest people in the United Congregational Church began a movement to establish a Sunday School and other Christian work in the southern part of the city. They made a start in a building on Thames Street not far above Wellington Ave. This became known as Grace Chapel.

3 – The cornerstone of a new church building was laid on the current site in 1892. The land was given to the congregation as a gift in memory of Nathaniel and Elizabeth Mumford Hammett.

4 – The building was raised, stone by stone, by the original members of the congregation as a sign of their personal commitment to God and to the mission of the Church in spreading the Good News of Jesus Christ.

5 – Over the course of the church’s history, the congregation of the First Presbyterian Church has been served by eleven pastors 1 – St. Mary’s Parish was founded on April 8, 1828 and is the oldest parish in the Diocese of Providence.

2 – On February 2, 1847, Father James Fitton, purchased for four thousand dollars, the land on Spring Street where St. Mary’s Church now stands. Work began on August 7, 1848, with the men of the parish each volunteering at least one day’s labor to help dig the “trenches.”

3 – The church was dedicated on July 25, 1852, by Bishop Bernard O’Reilly, under the patronage of the Holy Name of Mary, Our Lady of the Isle.

5 -The church was designated a National Historic Shrine on November 24, 1968.