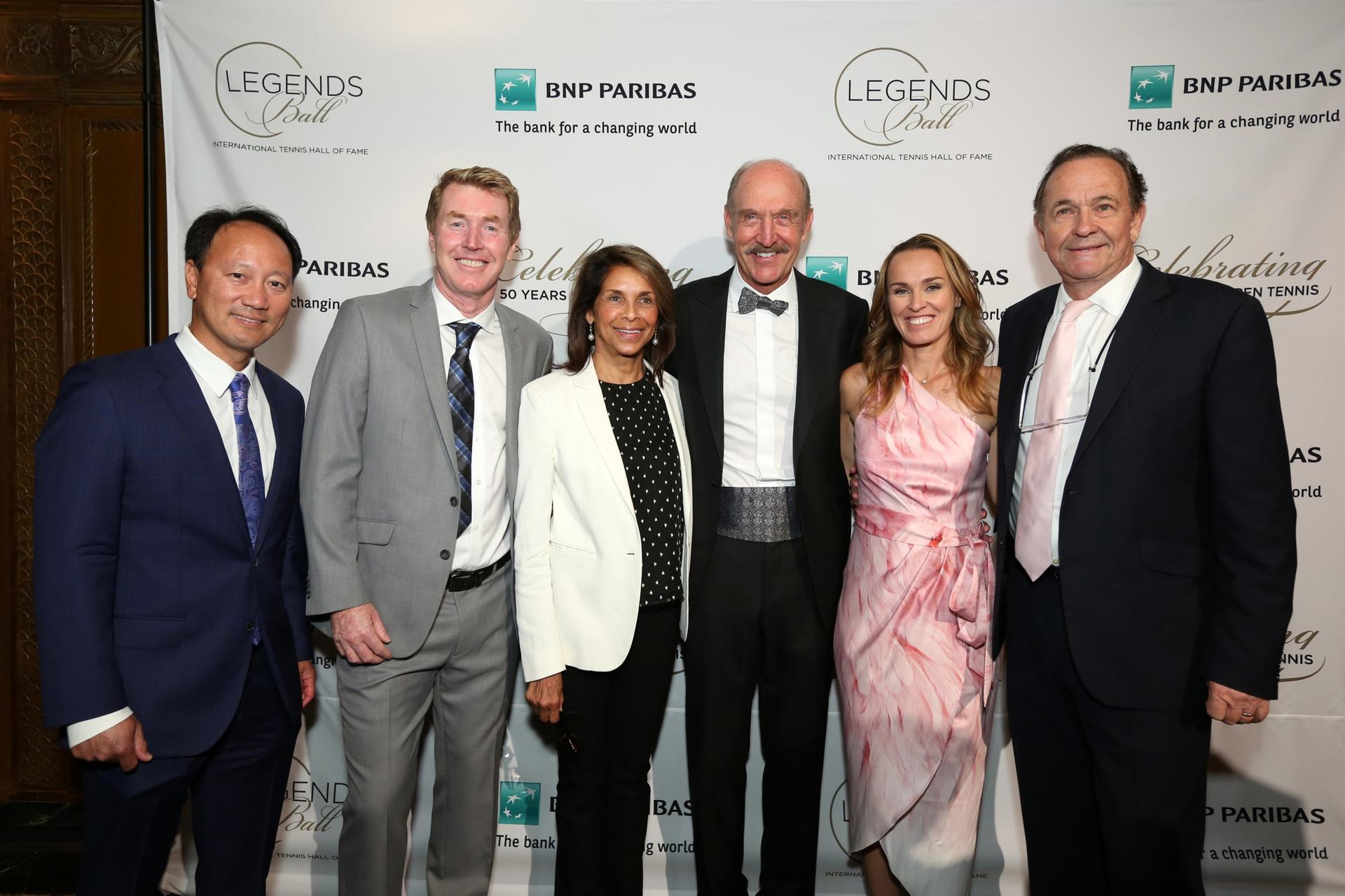 Newport, RI – During finals weekend of the US Open, the International Tennis Hall of Fame’s Legends Ball presented by BNP Paribas drew a crowd of Hall of Famers, tennis industry leaders, and dedicated tennis enthusiasts to celebrate the sport and honor its greatest champions and contributors. The annual event, which serves as a fundraiser for the Hall of Fame, was especially themed to celebrate a significant milestone in tennis history-the 50th anniversary of the Open Era. A stunning display featuring trophies from important tournaments in the Open Era complemented by dynamic imagery from great moments in the past 50 years decorated the room. Hall of Famers including Stan Smith, Pam Shriver, Charlie Pasarell, and Martina Hingis took the stage to discuss the impact of Open Tennis in 1968, and the sport’s subsequent dynamic growth.

Additionally, as is tradition, the Legends Ball also paid tribute to an individual and an organization who have shown a remarkable commitment to the betterment of the sport by the presentation of two special awards.

New York Times journalist Christopher Clarey was honored with the Eugene L. Scott Award, given in memory of the late Hall of Famer who was the publisher of Tennis Week magazine. The annual honor is presented to an individual who embodies Scott’s commitment to communicating honestly and thoroughly about the sport.
Clarey has covered global sports for The New York Times company for more than 25 years as a reporter and columnist. During his career he has reported from more than 80 Grand Slam tournaments, in addition to delivering extensive coverage of the sport’s major news and in depth profiles of tennis’ personalities. Previously, Clarey covered the sport for Tennis magazine and the International Herald Tribune. He has appeared on numerous international television and radio broadcasts including Eurosport, Tennis Channel, BBC, CNN, and NPR, among others. In addition to his extensive work in tennis, Clarey has covered 14 Olympics, five World Cups, five America’s Cups, nine Ryder Cups and many other global sports events.
- Advertisement -

At the Legends Ball, Clarey was introduced by longtime New York Times journalist and columnist George Vecsey, who also covered tennis extensively and has been a mentor throughout Clarey’s career.

“I am grateful to the Hall of Fame for this honor, and also grateful that they choose to honor a print journalist,” commented Clarey, in a moving speech in which he discussed the value of quality communication and thorough coverage of the sport. “For me, journalism is being there – watching the matches courtside not screenside and interviewing people face to face. I’m grateful to the players, coaches and administrators who have answered my questions over the years, sometimes when it was not terribly convenient. I also want to thank the institution that I work for today, The New York Times, for committing the time and resources to try and get the stories right.”

Longtime tennis brand Wilson was presented the Joseph F. Cullman 3rd Award, given annually to a company that embodies the commitment to tennis displayed by Cullman, also a Hall of Famer, who was one of the early sponsors of women’s pro tennis via the Virginia Slims Tour.

For more than 100 years, Wilson has been an intrinsic partner for tennis players, tournaments, and promoters. From strings to racquets to balls, apparel, and footwear, the brand invents, designs, and engineers game-changing products using state-of-the-art sports technologies and expertise, and draws from the insight of its 10,000 member strong Wilson Advisory Staff. This year, marked Wilson’s 40th as the official ball of the US Open. Wilson racquets have been part of some of the most significant moments in tennis history, from the classic Jack Kramer wooden racquet to the T2000, made popular by Jimmy Connors, to the iconic Pro Staff used by Chris Evert, Pete Sampras, and Jim Courier, among others. Today, great champions including Roger Federer (Pro Staff racquet) and Serena Williams (Blade racquet) rely on Wilson racquets, as the brand continues to grow alongside the sport.

After an introduction by Phil de Picciotto, founder and president of Octagon, Hans-Martin Reh, general manager of racquet sports for Wilson, accepted the Cullman Award.

Reh stated, “It is a great honor to accept this award from the International Tennis Hall of Fame. For many, many decades, Wilson and the Hall of Fame have shared a common passion for preserving, celebrating, and inspiring the game of tennis. At Wilson, our one goal is to be part of tennis in bold way that makes players, and their children, and their children’s children, choose to play the game. This goal is the lens by which we think about new tennis experiences and create new products. This means our products must not only perform at the most advanced, innovative levels, they must also feel and look modern. We are committed to helping our players, and new players, enjoy the sport even more than they do today.”

The Legends Ball was supported by presenting sponsor BNP Paribas. The event was co-chaired by John and Jody Arnhold, Stefan Bollinger and Antigone Theodorou, Russ and Judy Fradin, Martin Schneider and Debra Fine, and Dana and Jim Tananbaum. It was additionally supported by sponsors Chubb, Dell Technologies, Fila, Fidelity, and Rolex. Sotheby’s supported the trophy display with cases and transportation.

“The Hall of Fame was very pleased to join with tennis partners around the world in capping a year-long celebration of perhaps the most significant evolution in tennis history – the launch of Open Tennis,” said Todd Martin, CEO of the International Tennis Hall of Fame. “We are grateful for the support of our Hall of Famers, the tennis industry, and the event sponsors and co-chairs in creating a truly special evening at the Legends Ball to celebrate tennis history and to honor two special contributors to the sport, Chris Clarey and Wilson.”

Proceeds of the event will benefit the International Tennis Hall of Fame to support the organization’s mission of preserving and promoting the history of the sport and celebrating its champions.